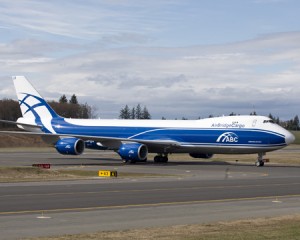 “The 747-8 Freighter was designed to give airlines more of everything they loved about the 747-400 Freighter,” said Elizabeth Lund, Boeing vice president and general manager, 747 Program. “It gives them more capacity, more range, more efficiency. And it gives them less of what they don’t want – less fuel burn, less emissions, less noise and less cost.”

The new 747-8 Freighter has exceeded dispatch reliability targets for its first six months of operation, and it’s doing so in five different airline operating systems.

To help make the airplane as reliable as possible from the very start, Boeing spent hundreds of hours getting the carriers ready to take the airplane. Boeing’s 747-8 entry-into-service team worked with the airlines to understand how they would operate the airplane, and made sure they had what they needed from day one — from spares support to flight manuals to training to engineering.

The first 747-8 Freighters delivered are operating even more economically than predicted.

“We knew these first airplanes would give our customers double-digit improvements in fuel burn over the 747-400,” said Bruce Dickinson, vice president and chief project engineer for the 747-8. “But our in-service performance numbers show that these airplanes are a full percentage point more efficient than even we predicted. That might not sound like much, but that can save an airline millions of dollars a year.”

The airplane also is giving great improvements to airlines in capacity, allowing them to carry more – 16 percent more – revenue-producing freight than the 747-400 Freighter, while still retaining such advantages as the 747-400’s nose door, which allows the airplane to carry outsized loads no other commercially produced airplane can carry.

And, after testing showed the 747-8 Freighter has a stronger structure than expected, Boeing’s engineers gave that improvement back to customers, adding 12,000 lbs. to the airplane’s operating design weights – meaning more payload and more customer revenue.

Recently, the airplane received approval to operate at London Heathrow Airport – the 200th airport around the world to permit 747-8 operations. It has flown revenue flights to more than 60 airports around the world – more than its closest competitor is even permitted to serve.