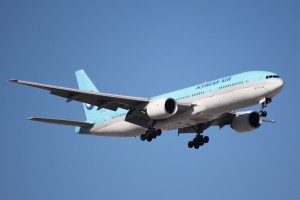 The crew of a Korean Air 777 airliner was forced to make an emergency landing at a military airbase on Vancouver Island after the airline received its second bomb threat in two days.

Korean Air flight 72, with 149 people on board, had taken off from Vancouver International Airport headed for Seoul, South Korea, at 2:30 p.m. PT Tuesday.

The crew turned back off the north coast of B.C. after a bomb threat was made in a telephone call to the airline’s Los Angeles office, a Korean Air spokesman told CBC News.

The flight was diverted to the airbase at Comox, on Vancouver Island, escorted by U.S. Air Force F-15 fighter jets that had been scrambled from Portland, Ore., according to Victoria’s Search and Rescue Co-ordination Centre.