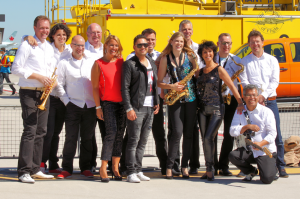 September 14, 2013 – Toronto Pearson put on a show and Night Flight stole the show.  Night Flight to Rio is a 14 member party band from the Netherlands made up entirely of KLM staff members.  They have been together three years and have built quite a following back home.

They entertained us all day and as I understand they have been invited back to headline next years Streetfest. NFTR played covers ranging from Meatloaf to the 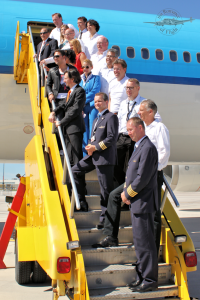 Pointer Sisters to Tina Turner to Ricky Martin and did every one perfectly.  The 5 piece horn section sets up the Latin flavour while the keyboard, drums and congas get you up and dancing.  The base is solid and the lead guitar is world class.  I have no idea why the male lead does this part time as he is simply amazing.  The two female singers are not relegated to back-up stature but rather rock the house on tunes that require a woman’s touch.  Proud Mary is hard rock perfect start to finish.

Mark your calendars for the 2014 StreetFest because this band was the highlight of this years event.