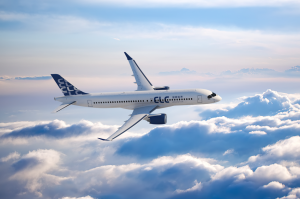 “This announcement, witnessed at the highest levels by both governments, reflects extremely well on the cooperation between Bombardier and China in the aviation sector, as well as on the overall economic relations between Canada and China,” said Minister Baird.

As previously announced by Bombardier, based on list prices of CS100 and CS300 aircraft, the contract is valued at approximately $1.02 billion US. Should all 15 options be exercised, the value of the contract would increase to $2.07 billion US.

“Given ongoing high fuel prices and increased environmental concerns, older and less efficient aircraft represent one of the greatest challenges to airlines,” said Mr. Wang. “Following an in-depth analysis of existing and re-engined aircraft, theCSeries family of airliners, with its unmatched economics, advanced technology, excellent operational flexibility, as well as its outstanding performance seemed like the obvious choice and shows great potential for operators in China and abroad.”

“We are delighted with this landmark agreement between CLC and Bombardier, as it not only represents the first Chinese customer to select the CSeries airliners, but also demonstrates the flexibility designed into these game-changing aircraft, as required by the diversity of our customers,” said Mr. Arcamone. “With the aircraft having recently completed its historic maiden flight, the worldwide momentum of interest for the CSeries aircraft program continues to grow and we are pleased that yet another leading lessor has placed its trust in the CSeries airliner,” he added.

“With its superb performance and cabin flexibility, as well as its transcontinental range and superior field performance, theCSeries aircraft is tailor-made to meet the fleet expansion needs of Chinese operators, and is an ideal complement to China’s domestic products,” said Mr. Solem.

CSeries aircraft
Designed for the growing 100- to 149-seat market, the 100 per cent new CSeries aircraft family combines advanced materials, leading-edge technology and proven methods to meet commercial airline requirements. Powered by Pratt & Whitney PurePower PW1500G engines, the CSeries aircraft family will offer a 15* per cent cash operating cost advantage and a 20* per cent fuel burn advantage. With the extra capacity seating option, the CS300 aircraft’s productivity further improves, offering airlines an average of four* per cent additional cash operating cost advantage per seat. The CSeriesaircraft’s clean-sheet design is ensuring that the aircraft will achieve greatly reduced noise and emissions, as well as superior operational flexibility, exceptional airfield performance and a range of 2,950 NM (5,463 km)*. The CSeries aircraft will be up to 12,000 lbs. (5,443 kg)* lighter than other aircraft in the same seat category and will provide passengers with a best-in-class, widebody cabin environment in a single-aisle aircraft.

As of today, Bombardier has booked orders and commitments for 403 CSeries aircraft, which include firm orders for 177CSeries airliners. Some 15 customers and lessees have joined the CSeries aircraft program.