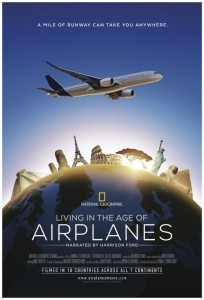 WASHINGTON, March 19, 2015 /PRNewswire-USNewswire/ — This spring, National Geographic Studios presents an immersive new giant screen film experience that offers a fresh perspective on a modern-day miracle that many of us take for granted: flying. Using spectacular aerial and nature photography, LIVING IN THE AGE OF AIRPLANES carries audiences across 200,000 years of history and around the globe on an epic journey to 95 locations in 18 countries spanning seven continents to remind us how, in a single century, aviation has changed our world forever. The world premiere of LIVING IN THE AGE OF AIRPLANES will take place at theSmithsonian’s National Air and Space Museum in Washington, D.C., on April 8, 2015.

Produced and directed by Brian J. Terwilliger (“One Six Right“), LIVING IN THE AGE OF AIRPLANES features an original score by Academy Award®-winning composer and pilot James Horner (“Avatar,” “Titanic”) and cinematography by Andrew Waruszewski.

The film highlights the astonishingly rapid advancements that have led to a world in which 100,000 flights take off and land every day. During the vast majority of mankind’s existence, walking was the fastest means of travel. Yet today, just 175 years after the introduction of the steam engine, boarding a jet to travel thousands of miles in a matter of hours is more often viewed as an inconvenience than a world-changing technological marvel.

“Since we were all born into a world with airplanes, it’s hard to imagine that jet travel itself is only 60 years old, just a tick on the timeline of human history,” said Terwilliger. “With this film, we want to reignite people’s wonder for one of the most extraordinary aspects of the modern world.”

“LIVING IN THE AGE OF AIRPLANES is the perfect film for National Geographic,” said Mark Katz, president of distribution for National Geographic Studios. “It combines the best of exploration and adventure, anthropology, geography and aviation — using captivating visuals to inspire and engage audiences on a variety of levels.”

LIVING IN THE AGE OF AIRPLANES will open nationwide in close to 20 locations including Washington, Boston, New York and Dallas. For a full list of theaters or to view the trailer, visit www.airplanesmovie.com. Become a fan on Facebook atfacebook.com/livingintheageofairplanes or follow us on Twitter @airplanesmovie. For downloadable images and video, log in to the press assets site: http://press.nationalgeographic.com/downloads/film_living_age_airplanes (username: press; password: press)

About Terwilliger Productions
Terwilliger Productions is an independent production company based in Los Angeles that produces high-quality, thought-provoking films. The company is best known for the aviation documentary “One Six Right,” a film that celebrates local airports as unsung heroes, which was distributed worldwide. For more information, visit www.terwilligerproductions.com.