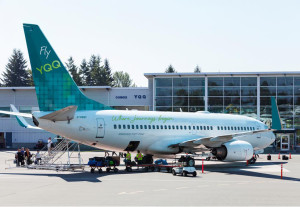 The airline is a wholly owned subsidiary of the Comox Valley Airport Commission and has successfully overcome other ULCC hopefuls in the race to raise sufficient capital to commence commercial service in Canada.

“The Comox Valley Airport Commission has raised $20 million to fund the operation of Fly YQQ, including the purchase of one Boeing 737-700 series jet, from an unnamed source,” confirmed Frank van Gisbergen, Chair of the Comox Valley Airport Commission. “With a focus on low-price air fares and a genuinely innovative operating model, we are confident we can make this airline work and change the way airports approach air service development in the future.”

The idea for the airline came after more than a decade of air service development work by the Airport Commission which did not produce the non-stop route to Hawaii that local residents were demanding.

“The stiff competition for routes among Canadian airports makes it virtually impossible for an airport of our size to attract a carrier to serve a long-haul route like Hawaii,” explained Comox Valley Airport CEO, Fred Bigelow.  “We realized that we needed to look at our business case from another angle.  The resulting model is a way to provide our passengers with the route they want, while providing another revenue generation operation for the Comox Valley Airport Commission.”

Bigelow explained the Commission will take a cutting-edge approach that utilizes its 55 Airport Volunteers for above-wing services including ticketing, check-in and cabin crew. Pilots will be drawn from the large cadre of retired Air Force and airline pilots in the Valley and will offer their services for free, in exchange for complimentary flights on board Fly YQQ. Airport Commission employees will be trained to provide all below-wing services including baggage handling.

“This means everyone from the CEO to the Marketing Manager will be tossing suitcases into the belly of the plane,” said Bigelow.  “The money we save on labour will ensure a healthy return on our investment.  All revenue from the airline will go directly into the operation of the terminal building, helping to keep our fees low for our other carriers like Air Canada and WestJet.  Frankly, it is a win-win for everyone.”

Service to Honolulu is planned for winter 2015/16 with the first flight tentatively scheduled for November 1, pending the completion of a cabin remodel that will accommodate the ULCC operating principles of Fly YQQ’s business model. If all moves ahead according to schedule, ticket sales could begin as soon as July 2015.

“Ticket bookings will be through the Comox Valley Airport’s website and we will be asking passengers to pick up and pay for their tickets at the airport,” explained Bigelow. “To keep administration costs as low as possible, the only form of payment we will be accepting will be cash or travellers cheques.  While we understand this is a bit old-school, we believe the low-cost pricing structure of our airline will make this minor inconvenience worthwhile for passengers.”

Tickets on board Fly YQQ will begin at $150 per direction for the least desirable* seat, ranging up to $250 for the most desirable seat. Checked bags, carry-on luggage and sitting next to your children will cost extra. Though Bigelow jokes that parents may consider this a perk. Since galley kitchens will be converted to accommodate additional seating, passengers will need to bring their own food and water onboard. Fly YQQ will not carry an entertainment system but volunteer flight attendants will be trained to lead sing-alongs.

*Depending on capacity, least desirable seat could mean standing room only. Seatbelts will be provided to comply with Transport Canada regulations.

Fly YQQ is a wholly owned subsidiary of the Comox Valley Airport Commission. Its purpose is to provide low-cost fares to Vancouver Island residents who are willing to forgo their own comfort to travel onboard our airport employee and volunteer run airline.  Fly YQQ prides itself on providing employment opportunities – particularly for those who are willing to work for free.  We believe in removing barriers to air service development for small Canadian airports– even if we have to start our own airline to do it.