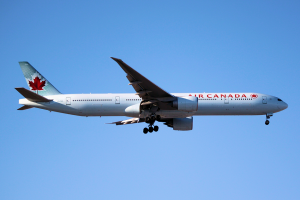 MONTREAL, June 19, 2013 /CNW Telbec/ – Air Canada has been named Best Airline in North America by the Skytrax 2013 World Airline Awards announced at the Paris Air Show. It is the fourth consecutive year Air Canada has been recognized as a leader in North America and ranked among the best airlines in the world. The annual poll, which is based on surveys of more than 18 million global passengers, is viewed as the key benchmarking tool for customer satisfaction by the global airline industry

“We are delighted that the Skytrax World Airline Awards has recognized Air Canada as the Best Airline in North America, making this the fourth consecutive year we have been named a leader in one of the most competitive markets on the planet. This award places Air Canada among the very best airlines in the world and confirms our ongoing commitment to excellent service,” said Calin Rovinescu, President and Chief Executive of Air Canada. “The ongoing transformation of Air Canada is indeed succeeding and our Four Star services on the ground and onboard are second to none – with such amenities as our seat back entertainment, Maple Leaf Lounges, concierge service and Executive First cabin with fully lie-flat suites. The award also reflects what our 35 million customers each year tell us through their loyalty: that Air Canada is one of the safest, most comfortable and convenient airlines to fly. I thank our 27,000 employees around the world for their pride, professionalism and dedication and who all share in winning this award.”

“We congratulate Air Canada not only in winning this major award, but the fact they are continuing their success from earlier years to retain this title as the Best Airline in North America. This award for the Best Airline in North America is testament not only to the many improvements introduced by Air Canada during the past year, but to the standard of service being delivered by Air Canada staff in all customer-facing areas, on the ground and onboard flights,” said Edward Plaisted, Chief Executive Officer of Skytrax.

The Skytrax Survey is operated during a 10-month period, with customers representing more than 100 nationalities from over 160 countries around the world participating. The 2013 Awards are based on 18.2 million completed customer surveys, and include over 200 airlines worldwide. The survey covered all types of airline, from largest international airlines to small domestic carriers, with customers ranking quality standards across more than 40 areas of airline front-line product and service. 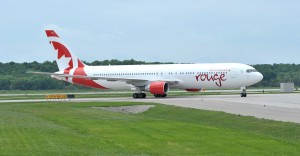 After being stripped to its aluminum base, painters applied primer, two coats of white and finally used massive stencils to spray on the airline’s distinct red and burgundy branding — about 70 gallons of paint were used over nearly eight days to complete the painting. In order to maximize fuel efficiency by adding minimal weight, the least amount of paint possible is applied while achieving optimal coverage. Following a short period flying Toronto-Dublin for AirCanada in June, starting July 1 the B767-300 ER plane will fly Air Canada rouge’s three European routes betweenToronto and Venice/Athens/Edinburgh and Montreal/Athens.

It joins two Air Canada rouge A319 aircraft already at Mirabel airport, which will initially fly Caribbean routes and are also undergoing interior modifications to reflect the airline’s relaxed, stylish approach to leisure travel. With this delivery Air Canada rouge now has 3 of its 4 startup aircraft, with the last painted B767-300ER arriving at Mirabel airport early next week. Air Canada rouge introduced its new inflight crew look earlier this week and also announced that its flight crews would be taking customer service excellence training at the Disney Institute in Orlando, Florida. 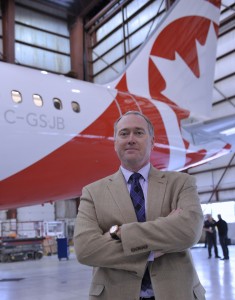 TORONTO, May 22, 2013 /CNW/ -Air Canada rouge VP Operations Al Read was on hand to take delivery of the leisure airline’s first Airbus 319 in its new livery today at Mirabel Airport, where the aircraft will be fitted with its new interior. Air Canada rouge is on countdown to takeoff as service begin July 1 to Europe and the Caribbean. New uniform designs and further training details will be made public starting May 27th.

Image with caption: “Air Canada rouge VP Operations Al Read was on hand to take delivery of the leisure airline’s first Airbus 319 in its new livery today at Mirabel Airport, where the aircraft will be fitted with its new interior. Air Canada rouge is on countdown to takeoff as service begin July 1 to Europe and the Caribbean. New uniform designs and further training details will be made public starting May 27th.

Complementing its Economy and Executive First options on international flights, Air Canada’s new Premium Economy cabin will offer customers a wide range of benefits including a dedicated cabin featuring larger seats that are wider, providing more recline, with seven more inches of legroom than Economy and are never more than one seat from the aisle (due to a 2-4-2 configuration).  Customers will also be offered premium meals with complimentary bar service and priority check-in and baggage delivery at the airport. More information on Air Canada’s new Premium Economy cabin is available atwww.aircanada.com/premiumeconomy.

“With the introduction of Premium Economy, Air Canada will begin offering customers a new, high-value option for enhanced comfort and service on international flights,” said Ben Smith, Executive Vice President and Chief Commercial Officer.  “The delivery of five new Boeing 777-300ER aircraft over the next 12 months provides us with the right opportunity to launch a new cabin of service that will be offered on more of our international flights over time as we take delivery of new 787 aircraft.  We will continue to adapt our product to ensure our customers have competitive options to choose from – whether traveling on Air Canada mainline routes or with our leisure carrier, Air Canadarouge, to its vacation destinations.”

“In today’s highly-competitive industry environment, it is critical to continue developing new products and refresh existing ones in order to ensure we offer customers the product features to meet their needs on a market-by-market basis,” said Mr. Smith. “We’re looking forward to introducing our first new Boeing 777-300ER with Premium Economy on our Montreal-Paris route beginning in July 2013.”

Continued Mr. Smith, “As these new Boeing 777-300ER aircraft enter our fleet over the next year, we will continue to deploy these five aircraft on routes in our international network where market demand calls for a larger supply of Economy and Premium Economy seats, in addition to continuing to offer Executive First business class service.

“The introduction of these Boeing 777-300ER aircraft in our fleet and launch of Air Canada’s new Premium Economy cabin on the Montreal-Paris route will allow us to compete effectively in a market with high demand for economy travel that is served by both international network and charter carriers.  We are confident Air Canada’s Economy and Premium Economy options will distinguish themselves as fresher and more appealing, in addition to offering our award-winning Executive First service featuring lie-flat beds,” concluded Mr. Smith.

The five Boeing 777-300ER aircraft that will begin delivery in June 2013 will be configured with a larger Economy cabin with 398 new “slimline” leather seats providing 31-inch legroom consistent with the comfort of Air Canada’s current Economy cabin, while the dedicated Premium Economy cabin of 24 leather seats will provide 38-inch legroom along with other enhanced comfort features.  Air Canada’s Executive First cabin will offer 36 seats that convert into 180-degree lie-flat beds in a staggered configuration of one or two, to allow customers traveling alone or with a companion to choose their preferred seating and sleeping options.  Customers in all three cabins of service will enjoy an enhanced individual seat back in-flight entertainment system with hundreds of hours of complimentary audio visual entertainment options featuring larger screens and customer-friendly technology by Panasonic.

Fleet Modernization to Continue with Introduction of Boeing 787

In addition to the introduction of Premium Economy, new seats and a leading edge entertainment system, Air Canada’s five new Boeing 777-300ER aircraft will provide customers with a refreshed interior colour palette in modern, neutral tones unique to these aircraft pending the official launch of Air Canada’s future in-flight product and cabin design that will be made in conjunction with the introduction of Boeing 787 aircraft into its fleet.

Air Canada’s 37 Boeing 787 aircraft will feature a brand new, enhanced version of Air Canada’s award-winning Executive First lie-flat beds and product that has yet to be announced, in addition to Premium Economy and Economy options.  The Boeing 787 fleet will be deployed on the carrier’s current and future high premium demand international routes. 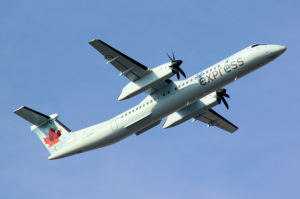 MONTREAL, Feb. 1, 2013 /CNW Telbec/ – With today’s departures of Air Canada Express flights AC8371 fromCalgary to Fort McMurray, AC8430 from Calgary to Regina and AC8586 from Calgary to Saskatoon, Air Canada introduced new Q400 service in Western Canada.  Concurrent with rolling out new, state-of-the-art Bombardier Q400 Next Generation aircraft in these markets, Air Canada announced it is boosting capacity on key regional routes this spring and summer in response to demand.

“Today, we are delighted to introduce the newest, ultra-quiet regional aircraft for customers in Alberta and Saskatchewan,” said Marcel Forget, Air Canada’s Vice President, Network Planning. “This spring, Air Canada will strategically increase capacity by either scheduling larger aircraft or adding flights to meet strong demand in WesternCanada and we will continue to roll out the Q400 aircraft on additional routes in BC, Alberta and the Northwest Territories in the coming months. Air Canada Express flights are scheduled to enable convenient, point-to-point, same-day business travel, as well as convenient and easy connections to Air Canada’s extensive domestic, US and international network at Calgary, Edmonton and Vancouver.”

Increased capacity this spring and summer compared to last year include the following routes:

Following today’s launch of the Q400 aircraft in Calgary, Fort McMurray, Regina and Saskatoon, the aircraft, featuring all-leather seats, spacious overhead bins and comfortable 31-inch legroom, is scheduled to be deployed in the coming months on the following routes: