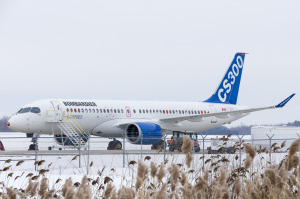 Bombardier Commercial Aircraft announced today that following a thorough inspection of the aircraft and a review of all the associated build documentation, Transport Canada inspectors have issued the flight permit that allows the first CS300 flight test vehicle to join the flight test program. Pending optimal weather conditions, theCS300 aircraft’s first flight is expected to occur during the period February 26 – 28, 2015. More precise timing will be confirmed approximately   48 hours prior. The aircraft is expected to perform a series of handling and system calibration tests, at a wide range of altitudes and speeds.

Everyone is encouraged to follow the CS300 aircraft’s progress towards its maiden flight at www.cseries.bombardier.com and via our social media feeds on Twitter (www.twitter.com/bombardier_aero) and Facebook (www.facebook.com/BombardierAero).

“This is an exciting time. The first four CS100 Flight Test Vehicles (FTVs) have flown more than 1,000 hours, test results are looking great and the CS300 aircraft will perform its maiden flight in the coming days,” said Rob Dewar, Vice President,CSeries Program, Bombardier Commercial Aircraft. “The success of the CSeries aircraft program is testament to the dedication and hard work of our partners, suppliers and in-house teams, and it has also benefitted greatly from the involvement of our customers.”

Bombardier is creating the future with its CSeries aircraft — the only 100 per cent-new family of airliners specifically designed for the100- to 149-seat, single-aisle market. Benefitting from a clean-sheet design that includes leading-edge technology and systems integration, advanced materials and latest generation aerodynamics, the CSeries aircraft offer a 15 per cent* cash operating cost advantage, a 20 per cent* fuel burn advantage, exceptional operational flexibility, widebody comfort and an unmatched environmental and noise footprint.

The CS300 aircraft offers the best seat-mile cost in its category, making it the most profitable solution for mid-sized markets with up to 150 passengers per flight, and ideal for a range of routes from     short-haul to longer transcontinental markets. With the extra capacity seating option, which provides up to 160 seats, the CS300 aircraft’s productivity further improves — offering airlines an average of four per cent* additional cash operating cost advantage per seat.

Bombardier has booked orders and commitments for 563 CSeries aircraft, which include firm orders for 243 CSeriesairliners.

Transport operator Braunschweiger Verkehrs-AG’s first electric bus equipped with Bombardier PRIMOVE technology began revenue service today in Germany. In the presence of senior federal and state representatives, the PRIMOVE electric bus completed its first regular passenger service in the city. This marks another important milestone for the practical application of the PRIMOVE system.

The passenger service has started with a 12 m long electric solo bus operating on the central circular line M19. From October, four additional 18 m articulated e-buses will be phased in. It will be the first time that eco-friendly 18 m electric buses have replaced conventional buses in regular passenger operation.

Each bus is equipped with the wireless PRIMOVE fast-charging system and the new PRIMOVE high-performance batteries. In Braunschweig, the world’s first inductive charging system is coming into use. With an output of 200 kW, it charges electric buses in just a few seconds, enabling them to cover the distance to the next charging station with ease.

For passengers, the PRIMOVE system will remain largely inaudible and invisible. The electric buses are not only quieter and cause less vibration than conventional diesel buses, they also accelerate more evenly – a much smoother ride awaits passengers in Braunschweig. The PRIMOVE high power charging pads embedded in concrete are installed under the road surface at the main station and at selected stops. The primary electrical installation is also integrated underground at the bus stops. The cooling units for those wayside power electronics have been neatly integrated into an advertising pillar and the shelter at the bus stop. The location of primary and wayside components underground or in existing street furniture offers great advantages to urban planners compared to conductive charging solutions.

As the world’s leading rail technology provider, Bombardier has a clear vision of the cities of tomorrow. We imagine cities where all vehicles are electric and where mass transit vehicles do not alter the landscape but seamlessly integrate to provide quiet and emission-free urban mobility. With the PRIMOVE portfolio, Bombardier is paving the way for transport operators and vehicle manufacturers to make an easy and convenient transition to electric mobility for all electric vehicles – from trams and buses to trucks and cars. The start of passenger services with the first PRIMOVE electric bus in Braunschweig proves that this vision has matured from an innovative idea to reality.

About the PRIMOVE Pilot project in Braunschweig

Under the term “emil” (electric mobility by means of inductive charging), the Technical University of Braunschweig and the energy supplier BS | Energy are participating as partners in the innovative project in Braunschweig along with Braunschweiger Verkehrs-AG and Bombardier. It is being funded by the Federal Ministry of Transport and Digital Infrastructure.

The electric buses from the manufacturer Solaris are fully charged overnight in the bus depot. A quick recharge of the batteries during the regular 10 minute interval at the last station is sufficient to ensure the smooth operation of the12 m solo e-bus on the 12 km route. The 18 m articulated buses require more energy and are therefore additionally charged for a few seconds at two intermediate bus stops. This custom-made charging concept ensures a maximum battery life and an uninterrupted operation with a clean e-mobility solution on the existing bus route.

An overview of how the PRIMOVE system works and how it compares to diesel buses is available on YouTube:

About the PRIMOVE portfolio

Bombardier is currently also working on implementing its PRIMOVE system for electric buses in Mannheim and Berlin, Germany, and in Bruges, Belgium. For the booming Chinese city of Nanjing, trams are being equipped with lightweight and long-life PRIMOVE batteries. In addition, tests with a dynamically charged  truck were successfully completed in Mannheim in January 2014. 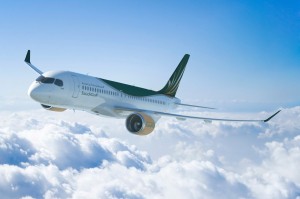 Based on the list price of the aircraft, the firm order for the 16 CS300 aircraft is valued at approximately $1.21 billion US. Should all 10 options be exercised, the value of the contract would increase to $1.99 billion US.

“This is an exciting time for the aviation industry in the Arab states and neighbouring regions, particularly when you consider that more than 54 million passengers moved through Saudi Arabia’s 27 airports last year alone,“ said Sheikh Tariq Al Qahtani, Chairman, SaudiGulf Airlines. “We are very excited about the CSeries aircraft’s suitability for this market and the long-term success it will bring to the region.

“With its clean-sheet design, modern technologies and competitive costs, the CSeries aircraft will give us the opportunity to introduce a new, quality, premium airline and an economically sustainable business model in Saudi Arabia, serving the domestic market, the Gulf and Middle East. SaudiGulf’s CSeries aircraft will offer wide and comfortable, leather seats, and in-flight entertainment in first-class, as well as economy-class seats,” added Sheikh Tariq.

“We have long been noting that the CSeries aircraft is attracting progressive airlines that are keen on opening new markets and operations,” said Mike Arcamone, President, Bombardier Commercial Aircraft. “We are thrilled that SaudiGulf Airlines, based in the largest Arab economy – and one with an underserved air travel market – will base the core of its business plan on the CSeries aircraft.

“In addition to supporting SaudiGulf Airlines in the region, the CS300 aircraft will allow for growth into new markets such as the Indian subcontinent and parts of Europe, as the airline seeks to expand its network and give passengers the latest in cabin comfort,” added Mr. Arcamone. 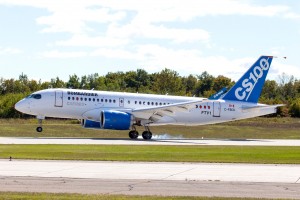 Bombardier Aerospace confirmed today that the CSeriesaircraft program is making solid progress and initial performance results are in line with the company’s expectations. However, based on the thorough review of the CSeries program after the first flight of the CS100 on September 16, 2013, the flight test phase will require more time than originally anticipated to ensure, amongst other things, that the aircraft has the overall system maturity to support a successful entry-into-service. TheCS100 aircraft’s entry-into-service is now scheduled for the second half of 2015 and will be followed by the CS300aircraft’s entry-into-service approximately six months afterwards.

“We are taking the required time to ensure a flawless entry-into-service. We are very pleased that no major design changes have been identified, this gives us confidence that we will meet our performance targets,” said Mike Arcamone, President, Bombardier Commercial Aircraft. “While the process has taken more time than we had expected, our suppliers are aligned with the program’s schedule and together, we will continue to work closely to move the program steadily forward. With the first flight of flight test vehicle 2 (FTV2) successfully completed on January 3, 2014, the CSeries aircraft program will continue to gain traction over the coming months.”

The CSeries aircraft’s clean-sheet design is ensuring that the aircraft will achieve greatly reduced noise and emissions, as well as superior operational flexibility, exceptional airfield performance and a range of 2,950 NM (5,463 km)*. The CSeriesaircraft will be up to 12,000 lbs. (5,443 kg)* lighter than other aircraft in the same seat category and will provide passengers with a best-in-class, widebody cabin environment in a single-aisle aircraft.

As of today, Bombardier has booked orders and commitments for 445 CSeries aircraft, which include firm orders for 198CSeries airliners. Some 17 customers and lessees have joined the CSeries aircraft program. 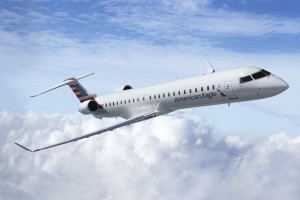 Bombardier Aerospace announced today that American Airlines Group Inc., of Fort Worth, Texas has signed a firm purchase agreement to acquire 30 CRJ900 NextGenaircraft and has also taken options on an additional 40.

With this order, American Airlines becomes the first customer to benefit from the latest enhancements to theCRJ900 NextGen regional jet. In addition to the four per cent improvement in fuel burn already achieved with the “NextGen” package, enhancements to the aircraft’s powerplant and ongoing weight reduction initiatives, which include upgraded avionics, will offer a further reduction of up to 1.5 per cent. Altogether, this represents a 5.5 per cent fuel burn reduction over the earlier generation CRJ900 aircraft, and up to 5.0 per cent lower fuel burn compared to announced competitive, in-production jets in the same seat class.

“It’s been an exciting week for American Airlines,” said Peter Warlick, Vice President, Fleet Planning, American Airlines. “We’ve closed our merger with US Airways Group, Inc. and as we begin the work to harmonize the American and US Airways operations, an agreement like this with Bombardier will greatly improve our ability to optimize our flying with the right aircraft to meet customer demand. This order will allow American to lower costs by replacing older aircraft.”

“We congratulate American Airlines and US Airways on their merger and are delighted that the merged airline will use Bombardier aircraft for its present and future fleet requirements,” said Mike Arcamone, President, Bombardier Commercial Aircraft. “Our ongoing commitment to the technological updates of our product offerings is today realized with value enhancements made to the CRJ900 NextGen aircraft. Over the years we have been successfully driving down operating costs by introducing fuel efficiency improvements and maintenance cost reductions. The product enhancements to theCRJ900 NextGen aircraft offer fuel cost savings of up to $500,000 US* per aircraft.”